WHAT IS RESUMEHUB?
ResumeHub is a website that showcases the profile (resume, GitHub and portfolio) of past, current and incoming software engineering interns at top companies. With more and more students dipping their toes in the workforce from an early age, the process of landing an internship has become increasingly cutthroat. By giving the opportunity to view winning resumes that made it past initial screenings, we’re hoping that this will help potential candidates refine their resume and build a winning one as well.

The amount of growth and exposure we received was unexpected yet encouraging, especially with all the comments and support given by people around us and users all around the world.


BACKGROUND
The team's software engineer was looking for an internship and wanted to know what kind of resumes would get one into the door of top companies - that was basically how my friends got the idea of ResumeHub.

Q. Why only software engineering?
A. There're amazing websites out there focusing on other fields (e.g. Cofolios and Bestfolios (with resume examples) for design) already, so although we had plans to expand, we've eventually decided to focus just on software engineering interns.
‍
‍
THE TEAM AND MY ROLE
The team currently consists of:
Karming Chin (Product Manager) - LinkedIn, Website
Curtis Lin (Software Engineer - Full Stack) - LinkedIn, GitHub
Ji Yoon Kwon (Legal Advisor)
Neroli Ko (UX Designer)
‍
I was so excited when my friend reached out to me about ResumeHub because this is such a brilliant idea and I could not be more thankful for being able to be part of it. Since they already finished a big part of the initial launch, my first task was to collect feedbacks from users.

Tools: Figma, Invision
01. DESIGNING THE FEEDBACK FORM
VERSION 1.0 FOR SOFT LAUNCH
Before going into the feedback form, let me explain what the website looked like at that time (before I joined):
‍

Homepage 1.0
After scrolling down, you'll see 2 rows of logos, and by clicking them a pop-up screen will show up with profiles of interns and links to their email, GitHub, LinkedIn and resumes.
‍

Scrolling down...
Then when you click on a company icon, the following pop-up window will appear:
‍ 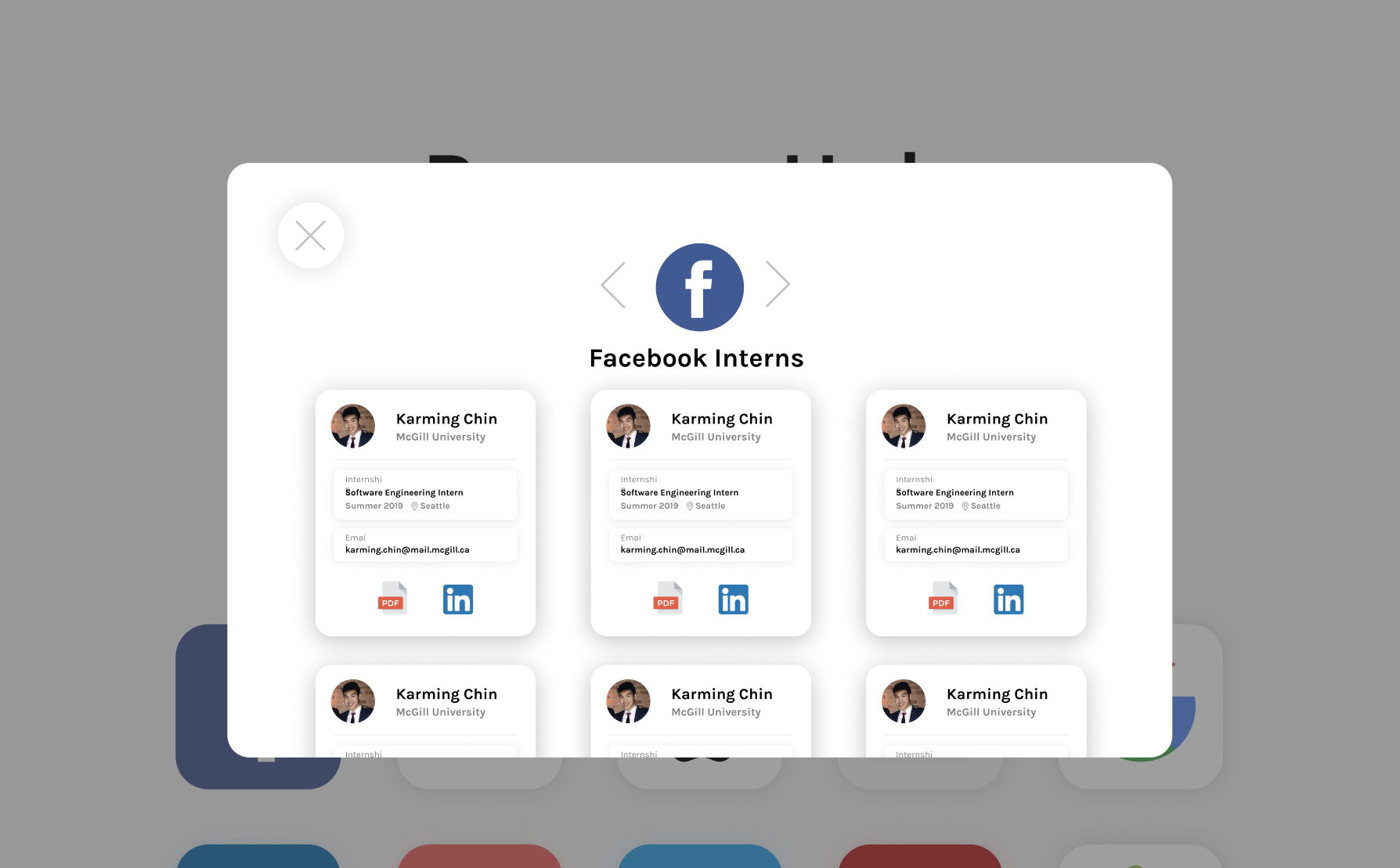 Pop up view 1.0
HOW THE FEEDBACK FORM WAS DESIGNED
I did some research on how to design a survey that would work the best in terms of asking for feedback remotely. Since ResumeHub was started as just a fun side project and my friends didn't expect it to grow into something serious, they didn't do any market / product research beforehand. This is therefore our first user research opportunity:
‍
RESULTS
We received a total of 15 meaningful responses and here's a summary of some interesting finds:
‍
As for the NPS, we have 5 promoters (9-10), 10 passives (7-8) and 1 detractor (0-6).

So in general, the main pain point was resumes not being discoverable enough. On the positive note, the idea of ResumeHub was a really good one because despite the areas of potential improvement listed above, most comments are positive, especially when it comes to the concept. (We are solving the right problem after all)

In respond to the feedbacks, I decided to make 're-designing the viewing of resumes' our priority.
‍
‍
02. RESUMES VIEWING RE-DESIGNED
THE GOAL
It makes total sense that people were expecting 'resumes' to be the first thing they'd see when they click into ResumeHub, because well, that's what ResumeHub's all about. So the goal here is to make resumes more discoverable.

‍
DRAFT DESIGNS
The first thing that came to my mind was something like this:
‍ 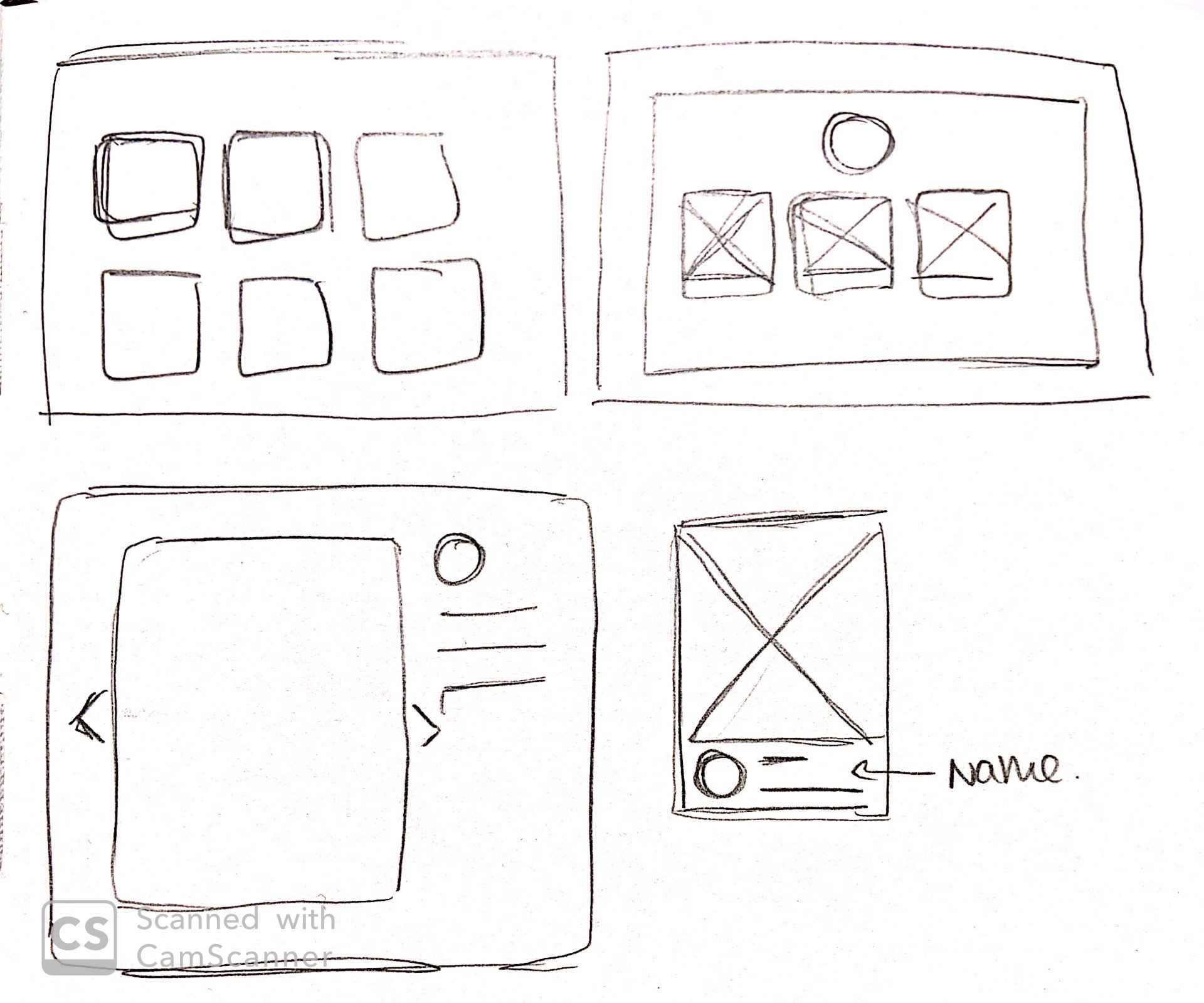 instead of profiles on the pop-up.

Turns out the product manager of the team (who designed the soft launch version) had a similar idea before too, but he went with the profile version because he is more interested in the Github / personal website link (and these are arguably more important than resumes in fields like software engineering). I definitely agree with his point, but I also agree that 'resumes' should be the first, if not the first few things that people see when they go onto ResumeHub, so I've decided to include both in my solution.

This is what it looks like after clicking on a company:
‍ 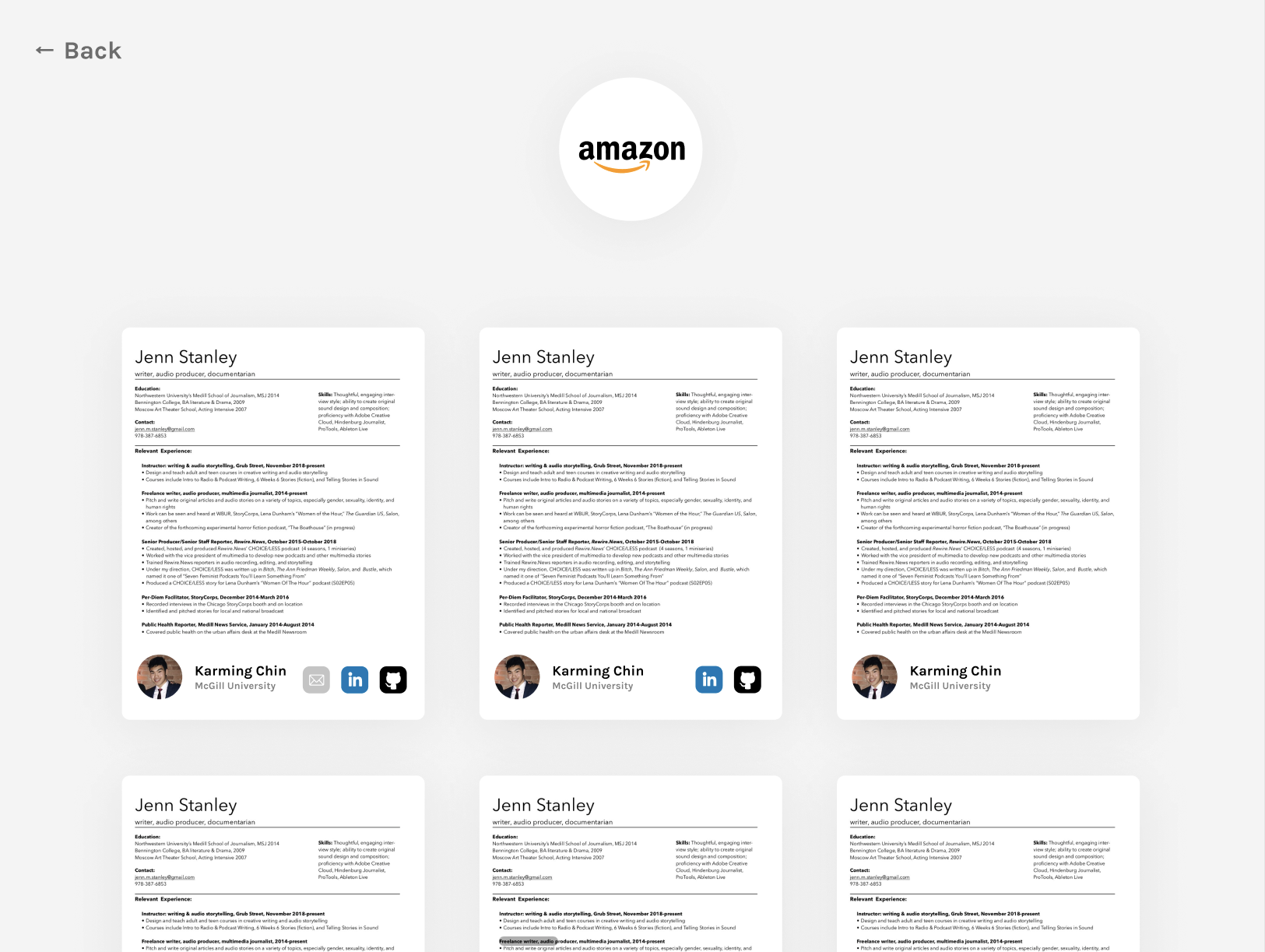 Re-designed company page (was a pop up before) 2.0
Here are a couple of versions I designed for the larger resume view:
‍ 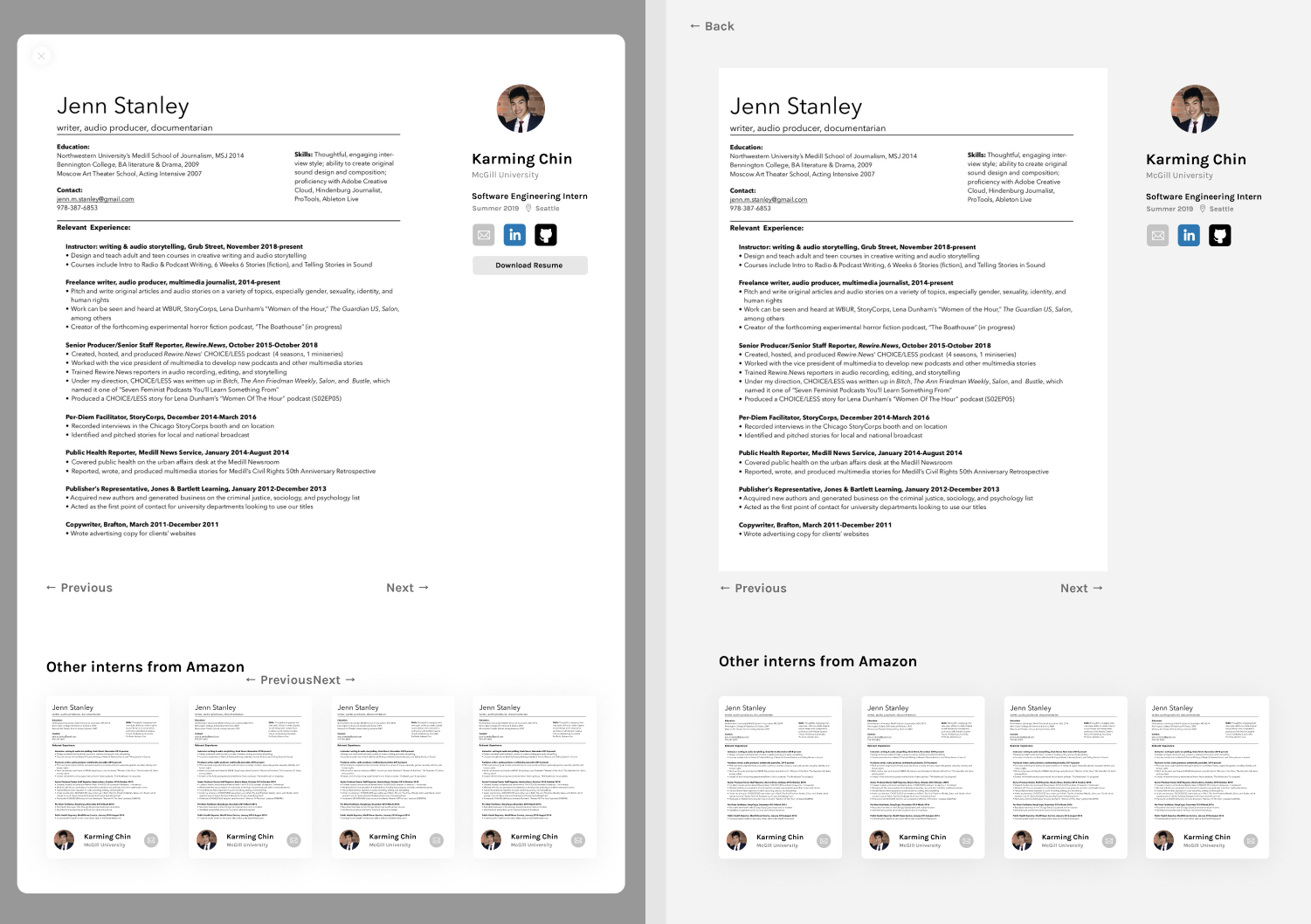 After a round of feedback within our team, we decided on this as our final draft solution:
‍ 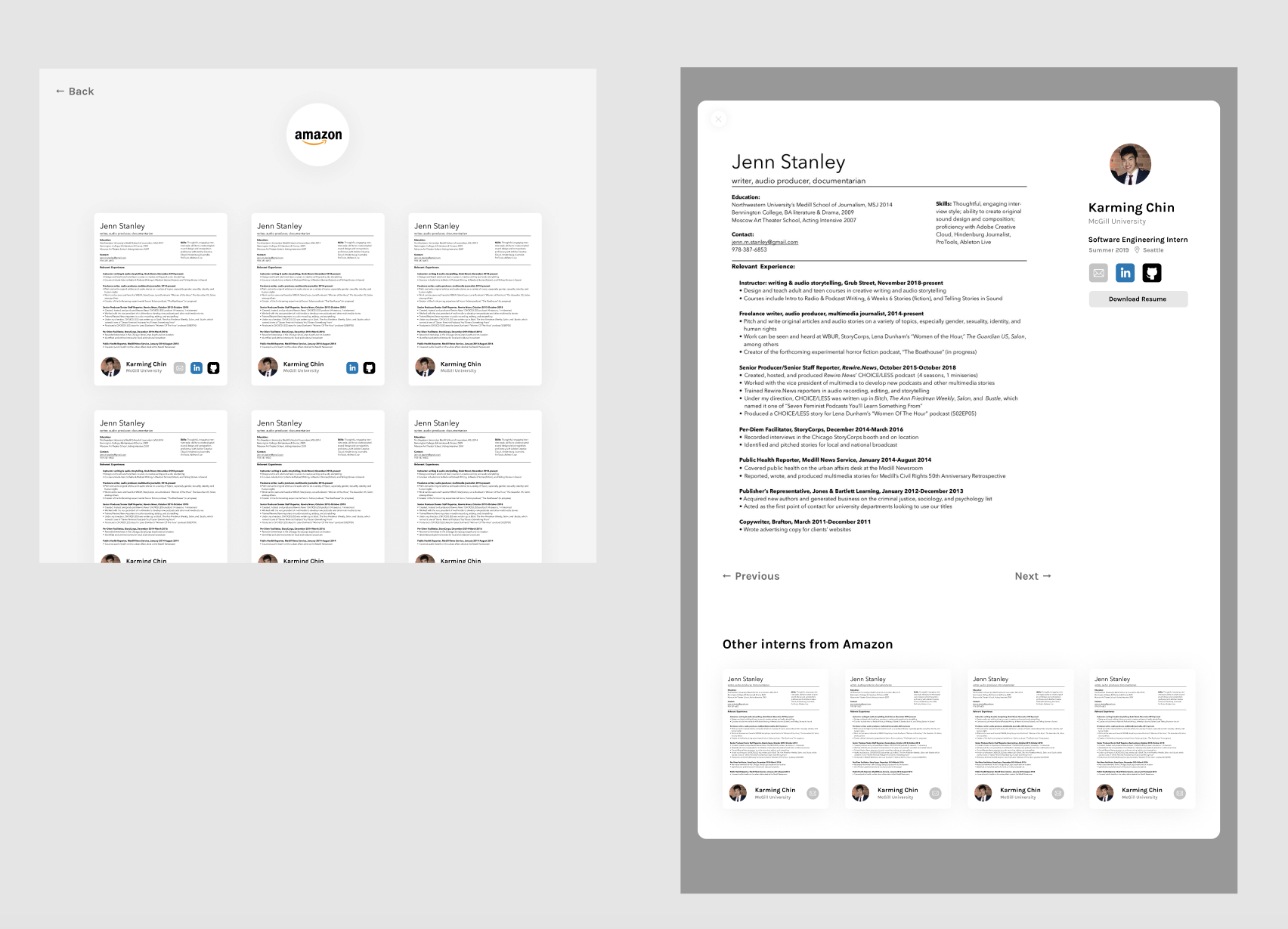 Company page and pop-up resume preview 2.0
By having the resume displayed on the window after clicking on a profile, we can reduce the no. of clicks required to view a resume (the previous design requires user to download the resume and view it on a separate window). Ideally the resume can be enlarged by clicking on it, but unfortunately due to technical difficulties we can only rely on the other 'Download Resume' button for users who want to read it up close.

The 'Other Interns' section is designed so that users can quickly view other profiles without having to return back to the company page. According to Google Analytics, it has since then become one of the most clicked features on the website. The 'Next' and 'Previous' buttons also allows easy browsing.

And here's the mobile version:
‍ 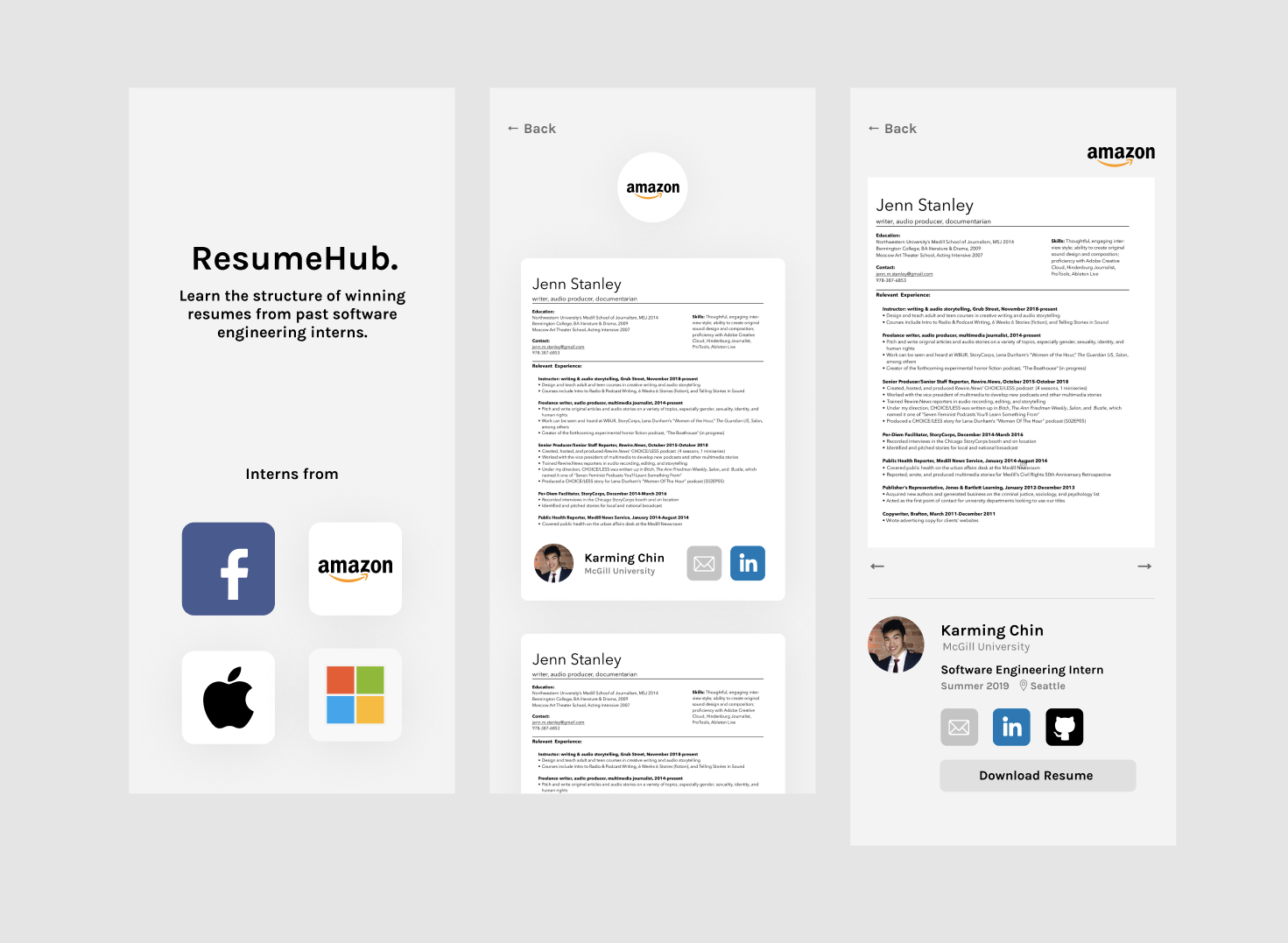 ‍
PROTOTYPING AND 1ST ROUND OF TESTING
With Invision, I created a prototype and asked 2 users to test it out. While the general feedback was good (it's a relatively simple website anyway), I did receive a few questions / suggestions:
‍
Here are one of the recordings for the user testing session:
‍
‍
IMPROVING THE DESIGN
In response to the testing results, I've changed the design in the following ways:

1. Adding tags to the profile
This allows users to check how relevant this particular profile is to their target position. Check out the prototype here.
‍ 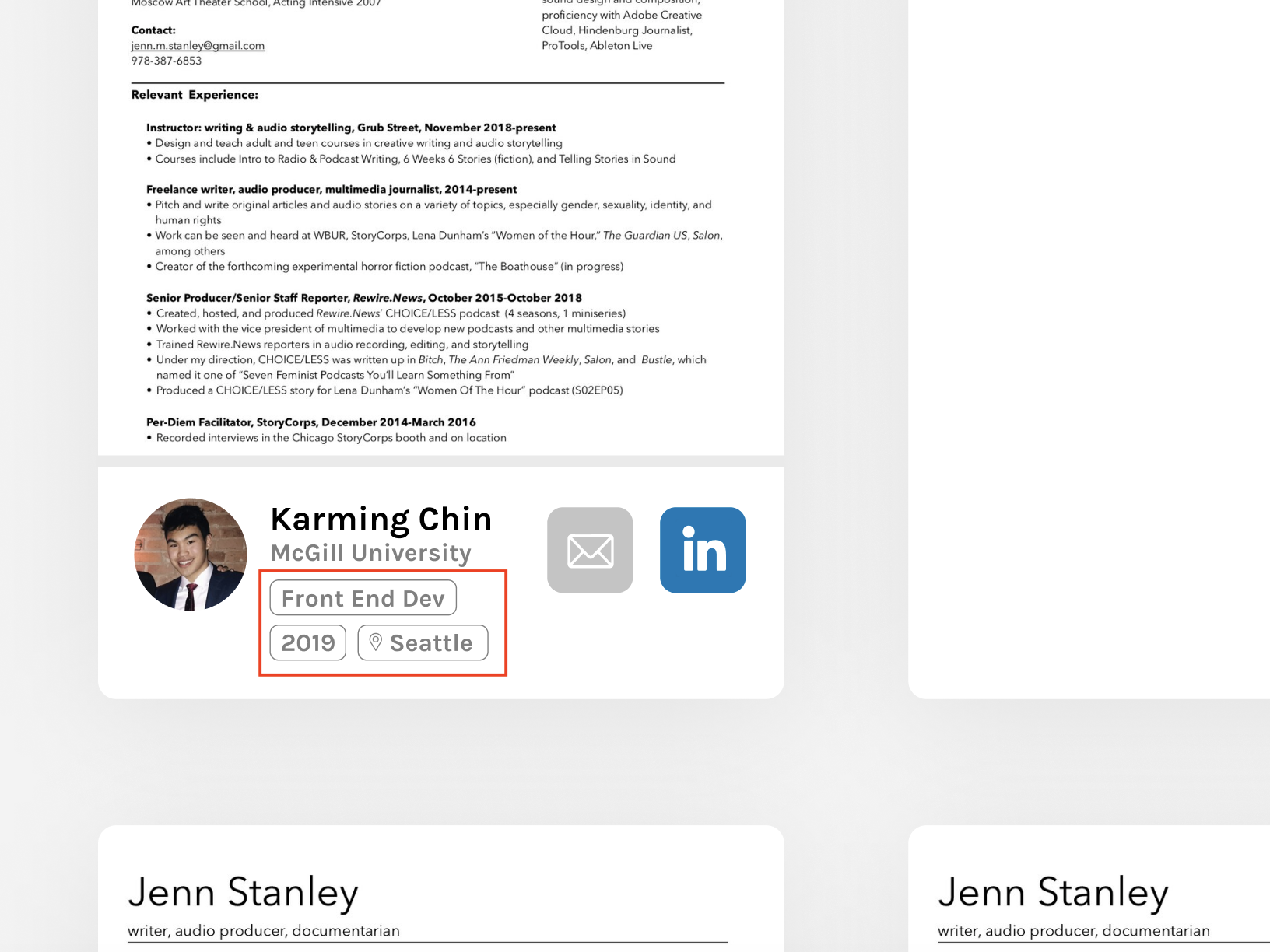 For the mobile view, I tried 2 other ways of displaying resumes previews (check out the prototype here), but it still looks a bit off. After further discussion with the team we have decided to keep it the same as before.
‍
‍ 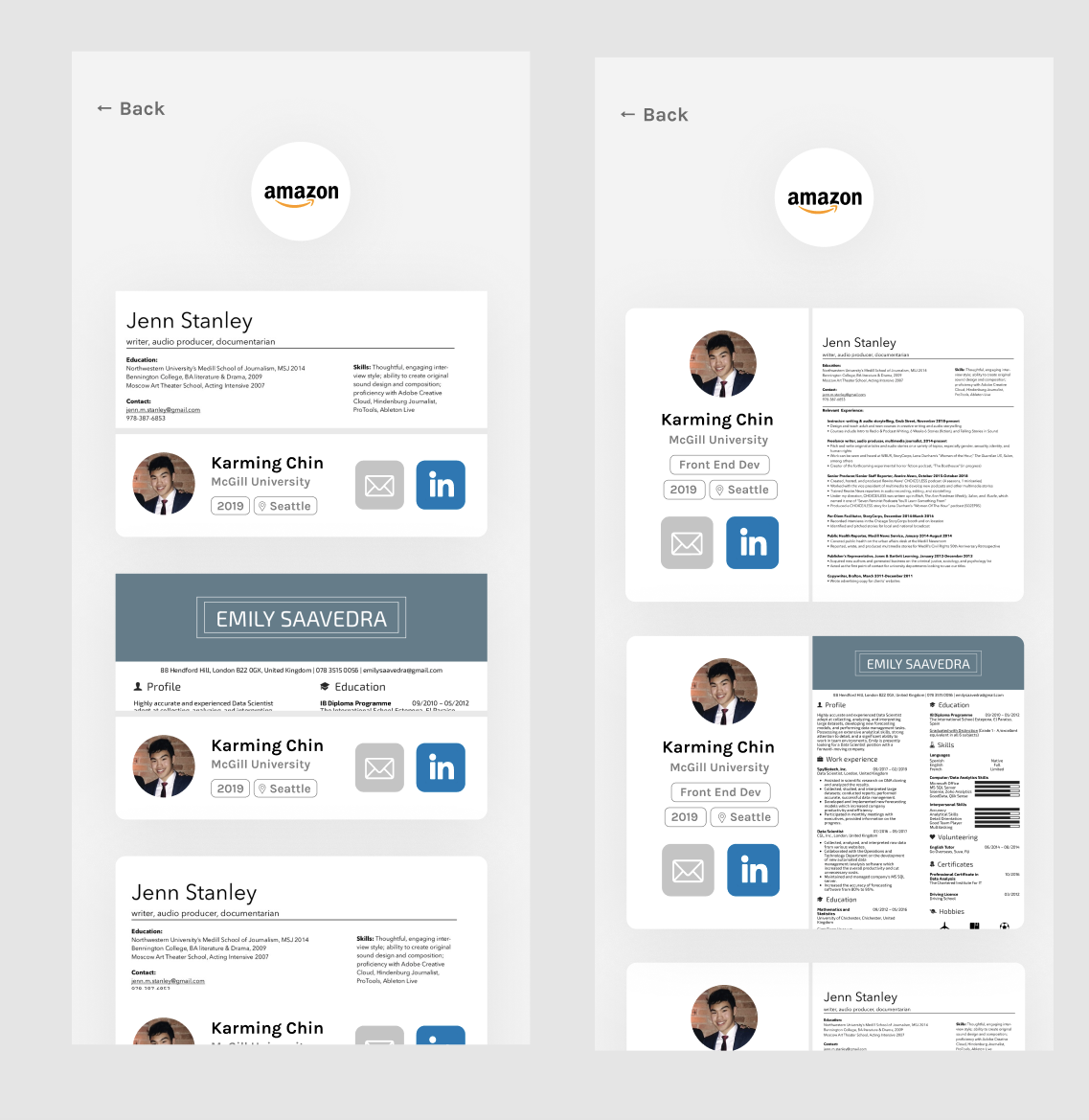 RESULTS
From our Google Analytics data, we observed an increase of 206.6% in resume view after the new resume preview design was introduced. The 'Other Interns' feature was also a success as it has become the most clicked event in the website at 77.78%.
‍
AND NOW...
The product manager is still working on releasing new features (like 'Resources' and 'Submit' that were recently introduced), and I'm responsible for redesigning the homepage to implement a filtering option as we expand beyond software engineering.

Some of my designs were deployed but due to technical constraints some are quite different from what we planned for it to be. There are also a lot of rooms for improvements (clearly), but since this is a side-project and we all have multiple things going on in our life it's definitely going to take awhile before we could perfect it. Nonetheless, it was a great initiative and I am very thankful to be able to take part in it.

Take a look at it here.
03. MAJOR REDESIGN + MORE INDUSTRIES
MAJOR CHANGES
As mentioned before, we had plans to expand to different fields but decided not to because similar websites already exists e.g. Bestfolios for design. Instead, we've decided to include more industries and companies within software engineering internships.

A simple 'filter by industries' function is therefore implemented, and alongside with new features introduced by the product manager, we took this opportunity to do a major glow-up in terms of the UI design.
‍

Homepage 3.0 with infinite scroll
1. Since we've decided to focus on internships only and they tend to have a more generic job title (i.e. Software Engineering Intern instead of front-end, back-end etc), the job title tags are not necessary anymore.
‍
2. To make sure that resumes are still discoverable and are among the first thing a user would see, we've decided to group resumes under industries instead of companies.

Pop up screen after clicking on a resume 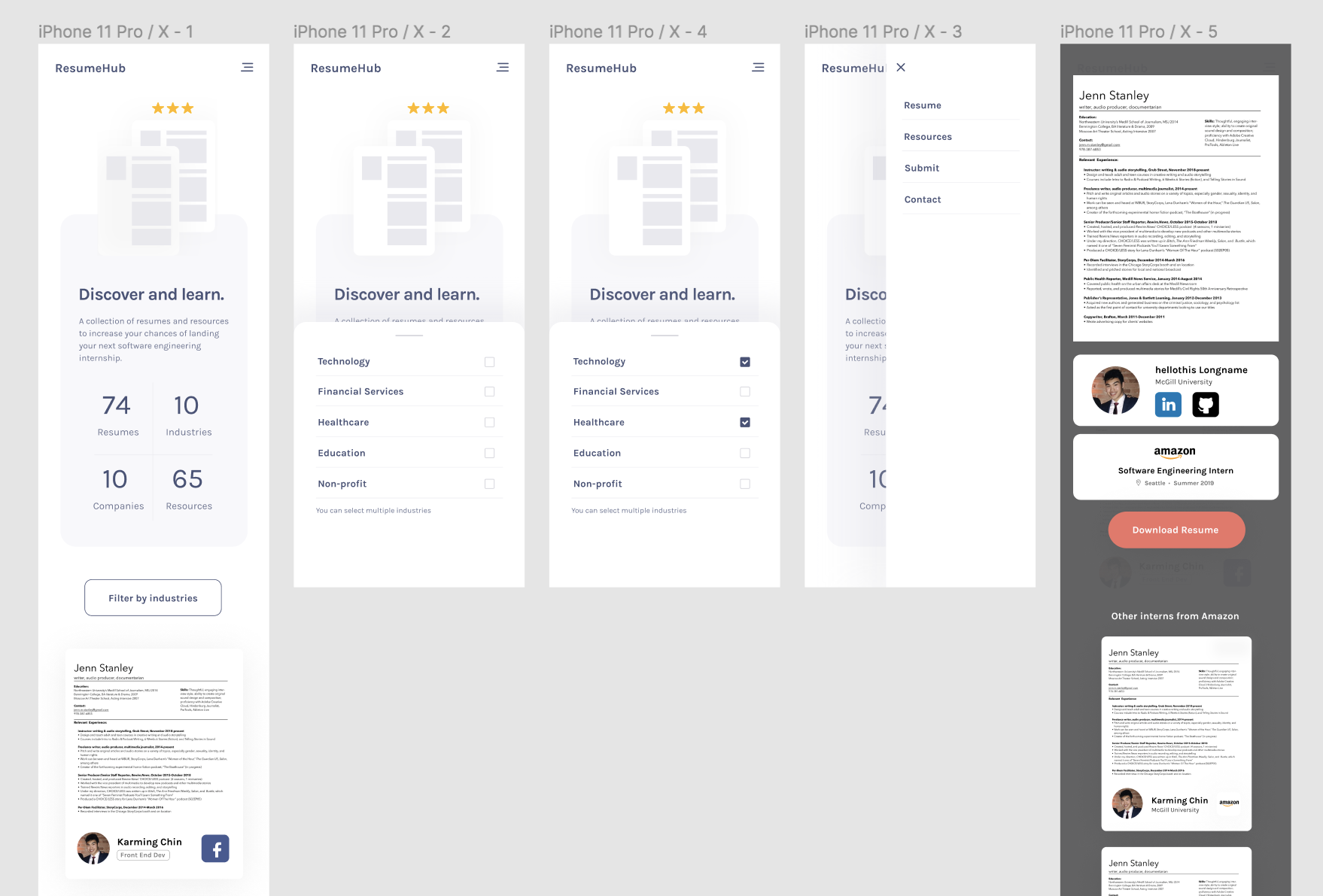 How the mobile version looks as of now
I've also re-designed the pop up screen and made the resume big enough for people to read comfortably without having to download it.

As of today I'm still working on the designs, and as you might have noticed, I've yet to conduct any user testings on the new UI. Please stay tuned as I update you with our progress!

‍
PROBLEM
As we expand our resume collection, we want to include more companies
RESULTS
Before showing you the results, I should explain briefly what the website looks like at that time:

When you first enter ResumeHub this page shows up.
‍

After scrolling down, you'll see 2 rows of logos, and by clicking them a pop-up screen will show up with profiles of interns and links to their email, GitHub, LinkedIn and resumes.
‍

Then when you click on a company icon, the following pop-up window will appear:
‍

So in general, the main pain point was resumes not being discoverable enough. On the positive note, the idea of ResumeHub was a really good one because despite the areas of potential improvement listed above, most comments are positive, especially when it comes to the concept. (We are solving the right problem after all)

In respond to the feedbacks, I decided to make 're-designing the viewing of resumes' our priority.
‍
‍
Next up: Redesigning the Etsy App →